My Cochlea Implant Journey (Yes I have one)

I was born as a preemie and we do not know if this contributed to my deafness.  As a child I wore hearing aids (the change in hearing aids throughout my lifetime has been incredible!)  As I grew older my parents inform me that my residual hearing that I had, which enabled me to wear aids was getting worse.  By the time I was 9 / 10 years old I was not benefiting from hearing aids as well as I used to.  My parents at this time were told that I have Meniere’s Disease and it will make my loss worse.  So, would my parents consider me having a cochlear implant at the age of 11 years old?  Bearing in mind this was such a new pioneering piece of equipment that had been done in America, but not so much in the UK.  My parents researched the pros and cons of having an implant and came to a discussion that they were not 100% sure if this was the right route for me.  So I continued using a hearing aid as a child.

As a teenager I struggled with my deafness and hated the barrier it caused in my everyday life, but I perserved and worked really hard in my education with the help of fantastic teachers and teaching assistances in my secondary school despite the hurdles I encountered being the odd one out and the newbie that never belonged.  When I completed my GCSEs I was thinking about what I wanted to do as a profession.  I knew I would love to be a teacher working with deaf children.  But, the big issue for me was I was going to have to do my Teacher’s Training as a mainstream teacher with classes of 30 odd hearing children.  Eeeeek!! How was I going to do that with my hearing loss as by this point I was getting nothing from my aids being profoundly deaf?  I knew I needed something more ‘powerful’ than a hearing aid.  My parents talked to me about the possibility of having a cochlear implant.  With this in mind, I asked for their support to see if this was an option for me.

I underwent the assessment procedure to see if I was suitable to have a cochlear implant, the assessment procedure is exhaustive and so many routes that you have to work your way through.  In 1994 it was agreed that I was a suitable candidate to have a cochlear implant.  I had the operation after I had completed my A ‘Levels in order to recover before I started University that September.  The operation back then was invasive and this meant I had to have stables in my head and for me, as an 18 year old the worst part was they shaved half of my hair off so this meant I had one half of head with hair and the other half with no hair!  Oh dear … out came the bandanas and head scarves to protect my vanity!! 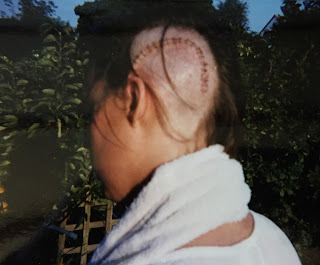 This is my war wound! 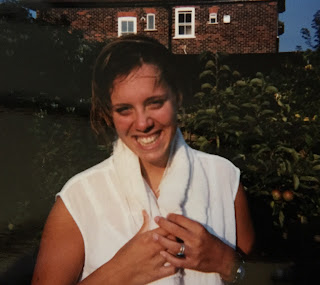 Me Smiling as always! :)

It was soon time for the switch on, now I have to be honest. I really thought that I would be able to hear so much with the implant. I had to listen to sounds being transmitted to the implant and this takes a long time to do (especially when you have tinnitus and you cannot distinguish between the beeps or the tinnitus beeps – so frustrating and tiring) after this is done (listening to the quietest beeps you can possibly hear and to the LOUDEST beeps you can tolerate) a map is then created and that is a unique map of what sounds I could receive through the processor. It was then time for the switch on … I waited … I waited and thought I can’t hear anything!! I could pick up some very quiet sounds that meant nothing to me. I was gutted. My audiologist explained to me that everyone response differently to the sounds and I would have to learn the sounds as I am profoundly deaf, my brain has never encountered certain sounds so were not ‘stored’ in order for me to recognise them. So this was the start of a long journey for me. I had to go back to hospital every 6 months to have my map redone until I was happy with the sounds. Since then I have had to ask people around me what certain sounds are in order for me to store them into my memory and this is still something I do now, as there are always new sounds that I have not encountered before.

This is an x-ray of the internal part of the implant: 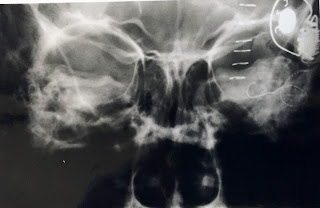 When I got my first processor it was a body worn processor and I HATED it because I liked to wear dresses and there was nowhere for me to put the ‘box’.  I had to either tuck it into my knickers or put it in my bra… not nice when it was hot.  I was over the moon when about 5 years later I got a behind the ear processor! 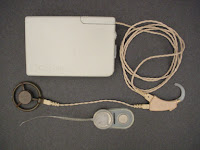 Behind the ear processor

I have had my implant for 22 years now, and I am due for an upgrade of the external processor and I am really hoping that this will make a difference for me as even with my implant on I am still profoundly deaf.  Yes I can hear peoples’ voices in the room that I am in, but I do not know what the voices are saying, so I have to lip-read them in order to understand what they are saying.

Up till 10 years ago, I was able to use a hearing aid in my other ear so I was getting sound in both ears and I felt more ‘whole’ and ‘balanced’ if that makes sense.  With the birth of my two amazing daughters my Meniere’s flared up and this meant I was bedridden for a while as I could not walk without falling over and if I looked at walls and ceilings it felt like they were spinning round or had waves in them.  It was horrid and I still have spells every now and then, but I get on with it.  Unfortunately due to those episodes the little hearing I had in my other hear went.  I tried new hearing aids, which were meant to be the best but they did not work for me anymore and no sounds were encountered so I had to give up wearing an aid in that ear.  I was heartbroken and felt that I was not complete and very unbalanced.

I feel the answer for me would be to have an implant in my other ear, I have asked for one three times and this has been rejected due to my age and funding.  If I were 18 I would have one straight away.  This really upsets me but I cannot do anything about it unless I win the lottery!!

When I had my implant, people assumed that this piece of equipment would make me hearing like ‘hearing’ people, this is not the case.  When my processor comes off I am DEAF DEAF, I cannot hear a thing.  If an ambulance or fire engine was right next to me with the sirens on, I would not hear that at ALL.  I feel vibrations of very loud things (think road digger) but I would not hear it at all.  .

When I wake up, I shower and brush my teeth in silence; everything is silent until I put the processor on.  When I speak with the speech processor off, I talk very loudly because I cannot hear myself and cannot modulate my voice.  This is when my family and friends know when my battery has gone and needs replacing!

A vivid memory I have of when I was retuned a few years back.  The audiologists often ask me to go for a walk to familiarise myself with the new map.  I needed to go to the loo.  I sat down and did a wee (too much information?), I thought to myself I can hear a funny noise.  I do not know what it is.  I went back to the clinic and asked what all that was about, for the audiologist to say to me, that was the sound of you doing a wee!! I never knew we made noises when we went to the toilet apart from farts as that’s a vibration! Lol. 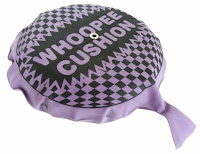 I hope that this was interesting and useful information for you. As always I love comments and feedback as they encourage me to write more!

Thank you for your time.